I have an important announcement to make: This weekend, I was successful in getting my husband, Doni, to eat okra! 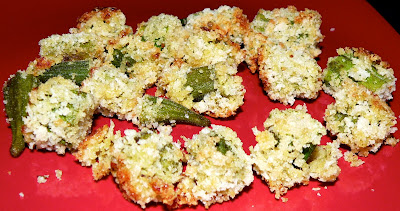 Are you as excited as I am? You may remember that last August, I declared my love for okra. I'll take it steamed, fried, roasted, stir fried, and especially pickled any day of the week. I'm a big fan of the flavor and texture, and I don't mind the slime at all. Doni, on the other hand, was less than enthused and wanted nothing to do with the slime.

This weekend, I tried a new technique: The fake fry. And a new ingredient: Panko bread crumbs. Check out the easy step-by-step recipe at Baked from the Heart's Baked Blog! Do you have a favorite okra recipe or a tasty strategy to trick your loved ones into eating their veggies? Share it below!
Posted by StephSK at 9:39 AM No comments: Links to this post Recently, I found myself at a local vegan cafe, and was pleasantly surprised when i found a pile of jicama slices next to my sandwich. I had eaten the root veggie a couple times before, but it wasn't until last week that I realized what a versatile, low cal snack it really is.

As easy as a potato to peel and slice (no fruity seeds or cores to make things complicated), 1 jicama is kind of huge--probably about the same size as my tiny head--and remarkably low calorie. In fact, 1 cup of sliced jicama is only 46 calories--a huge bang for your caloric buck. It's juicy flavor is really unique, a cross between a sweet pepper and cucumber, in my opinion.

It can be prepared in a variety of ways, including throwing it into a salad or stir frying it in place of water chestnuts. But I am most privy to eating in raw, french-fry sized sticks, sometimes plain and occasionally with some light, herbed cheese or salad dressing.

So next time I find myself in front of the tv, I'm saying no to my higher calorie chummus and crackers snack and bringing out the jicama instead. Have a favorite jicama recipe? Share it below!
Posted by StephSK at 7:18 PM No comments: Links to this post

As you know by now, I've had a cold for a few weeks. Desperate for any advice that might help, I've turned to the hard stuff--hot toddies. A cousin suggested I knock a few back with this easy recipe:

1.5 ounces of Bourbon (or rum or cognac), tea, hot water, lemon and honey. Use a big mug. Drink a few and you will feel much better.

Simple, right? But with the variety of liquors and teas out there, I was able to try a few variations. But first, a few words about the hot toddy itself. It's a mostly Scottish, and sometimes Indian, concoction that has a history in soothing the common cold. According to Wikipedia, The American Lung Association recommends against the hot toddy as a treatment for a cold because "alcohol causes dehydration". But just like everything else in life, there's little harm in moderation. And it won't hurt to keep up with your fluids if you are fighting a cold or flu like me.

I decided to start with a concoction that was about as close to my cousin's recipe as I could feasibly make with the ingredients I had in my kitchen. The second and third toddies were variations on the tea + alcohol + lemon juice + honey combination. 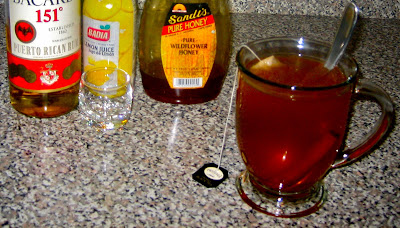 The verdict: Surprisingly delicious! Obviously the rum was strong, so I recommend drinking this with a full belly of food and plenty of non-alcoholic liquids. But it was sweet, not too strong, and it really helped rid me of my cough. After drinking about half of it, I was ready to curl up and go to sleep. A success! The verdict: I had forgotten that I'm not a huge fan of this particular tea...it's too...buttery? The amaretto just wasn't strong enough and I couldn't taste it at all. While warm, this potion just didn't have the same soothing quality as the first toddy. 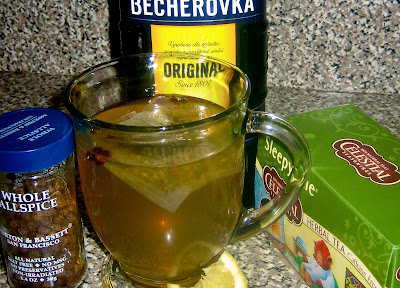 The verdict: Because the becherovka and sleepytime tea have the same licorice/spicy undertones, the combination was actually quite nice. Did it cure my cough as well as the first toddy? Not so much. But it was definitely enjoyable. 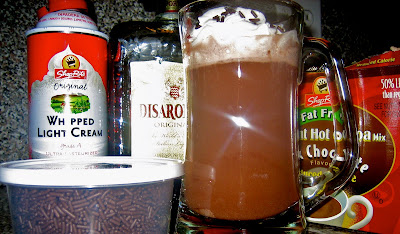 And what was Doni doing while I mixed up all these toddies? Creating his own spin on the warm, comforting, alcoholic drink. So maybe the chocolate won't soothe your cough or make your cold a little lighter, but an Amaretto Hot Cocoa is always delicious!

1 serving of your favorite hot cocoa, prepared according to package directions.
2 oz amaretto
a whopping dollop of whipped cream
a dash of sprinkles

I think you can figure out the details on your own. Cheers!
Posted by StephSK at 7:09 PM 1 comment: Links to this post

This month, due to a really long cold that just won't go away, my posts have been few and far between. I just haven't been able to do much cooking. So what's gotten me through these cold winter days? Besides Doni serving up lots of hot cocoa, it's all about the candy canes. Why buy cough drops when there are so many varieties of candy canes out there right now (at about 40 - 60 calories a pop)? Here's a little photo essay of the canes I love and those I definitely want to try.

(Kosher note: I cannot guarantee the kosher status of these candies, so please check before purchasing if this is important to you.) 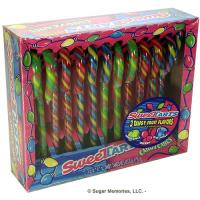 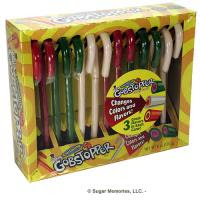 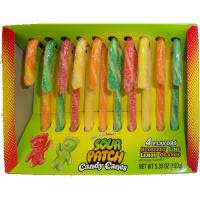 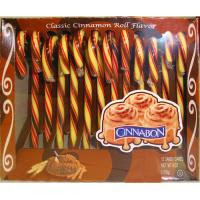 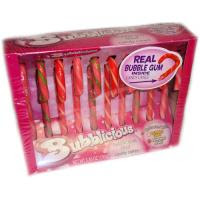 Posted by StephSK at 4:09 PM No comments: Links to this post

Email ThisBlogThis!Share to TwitterShare to FacebookShare to Pinterest
Labels: all the sweet stuff
Older Posts Home
Subscribe to: Posts (Atom)

Hi. I'm Steph. I keep kosher. And I've been a vegetarian for 14 years! I love to cook and experiment in the kitchen. So here I am, hoping to keep all of my trials and recipes in one place. All suggestions, comments or ideas welcome!